India and China Real estate market – How do they compare? 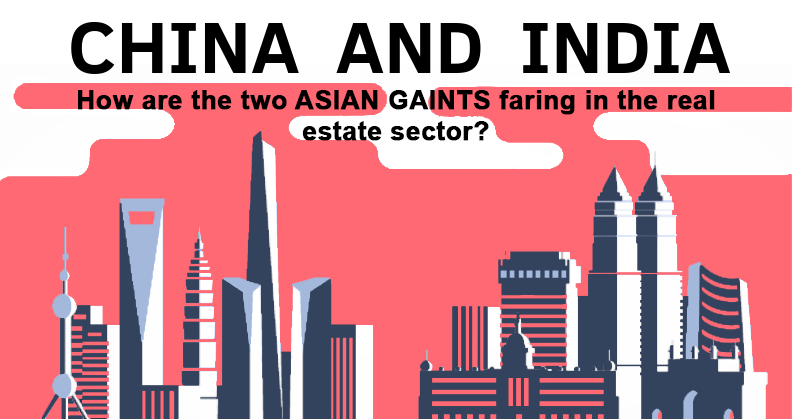 China has the biggest Real Estate market amongst all the countries. It makes up for more than 25% of its GDP, contributing almost $65 trillion to the country’s income. Hence, it came as a jolt when Moody’s downrated the ratings of 51 of the 61 top property developers to ‘CCC’ or junk recently.

Indian property developers too are finding it difficult to raise capital with the NBFCs (non-banking finance companies) and HFCs (Housing Finance Companies) showing them the exit door. With capital drying up, the unsold inventory is accumulating and developers have been forced to shut shop or ongoing construction works. With no respite in sight, some have even filed for bankruptcy.

Do investors in two of the most robust economies in Asia need to worry?

‘Housing’ is very important to both the countries, both as a need of the growing population as well as in maintaining healthy GDP. Earlier the responsibility of housing construction lay with the government. Private developers entered the market in China in 1978 in China and in India only in 1990. Since then, the market has grown by leaps and bounds forming a major chunk of the country’s income along with generating a majority of the employment opportunities.

The Real estate Market in China showed a slump in 2014-2015. This was caused due to the sluggish economy and reduced capital in the market. The slump forced the developers to slash prices in order to increase sales to pay off their debts. After 2018, the market again seems to have been in a flurry. The rising housing prices across the cities, combined with unaffordability has left the investors jittery and uncertain.

The performance of real estate across both countries mapped over the last seven years paints a promising picture.

The Indian market, however, is comparatively going strong. A slowdown in growth is visible in the 2016- 2017 FY due to the introduction of GST and RERA. However, the market has become stronger, owing to increased accountability and transparency. The market is projected to grow further in 2019.

The housing prices recorded, in the Tier 1 cities are highlighted in the table below. The trend is seemingly stagnant. To determine prices, average rates of transactions for the past seven years have been considered.

The price-to-income ratio gives an idea about the affordability. It can be explained as, the number of years for which a household would have to save, without any consumption to be able to afford a home.

As per market estimates price-to-income ratio for Hong Kong stands at about 17.6 while in Shanghai it is 13.9. Guangzhou at 9.2 is better off amongst all the Tier 1 cities.

The figures back home are more promising. Kolkata along with Ahmedabad and Pune lead with a ratio of 3. Affordability is the least in Mumbai, with a price-to-income ratio of 11, almost matching levels prevailing in Shanghai.

Rental yield is defined as the annual returns or income generated from a property as a percentage of the entire initial purchase cost. Gross rental yield is often used to predict market trends.

The average residential yield in India is estimated to be about 3%. Kolkata is at the forefront with 3.9%, followed by Bengaluru and Hyderabad. Mumbai scores the worst. Moderate yields have been recorded in the Greater Noida and Noida owing to new supply.

China market is in a worse situation, recording an average yield of about 2%. The rental yields in every Tier 1 city namely Beijing, Shanghai, Guangzhou, and Shenzhen dropped stands close to 2.5%.

Rental yield of 4X or above is considered optimal and the low yields prevalent in both the markets are a cause of concern.

The Chinese realty market is currently going through a housing bubble. An average person cannot afford to buy a house owing to the skyrocketing prices.

Country’s urban housing supply is in very bad shape, with close to 50 million houses lying empty In Tier 1 and Tier 2 cities. Tier 3 and 4 cities are better off, owing to government policies and comparatively better affordability. The rising inventory overhang too has subsided in the latter as compared to Tier 1 cities.

The market in China relies on credit expansion. With capital drying up due to tightening of regulations and restrictions, developers are hard pressed to find buyers to fund their incomplete project.

Hence the overall scenario looks bleak for the housing market in China. This combined with the ongoing trade war with the United States sure spells doom for the realty sector as a whole.

The Indian market is going through a somewhat similar phase. The Government recently initiated policy overhauls targeting the realty market. Also, the revisions in GST, has left investors speculating. A recent crisis in the housing finance sector further added to the chaos.

With no one to provide liquidity for the ongoing projects, developers were left staring at an uncertain future. This had a direct effect on the realty market, impacting sales and leading to a rise in unsold inventory.

Though all seems gloomy in the real estate markets, a silver lining still exists. The markets in India, as well as China, seem confident. The government taking note of the imminent crisis has started taking necessary measures. The Chinese market is more robust of the two, with the government having more control. Policy regulations and deleveraging campaign by the Government to keep the price rise in check are expected to help normalize the market. The rapid urbanization and property upgradation are likely to boost sales.

The lower tier cities are seen as demand drivers for the market in the future. The larger developers are expected to perform better than the smaller ones. The confidence is indicated by the bigger players investing aggressively in land banks and assets in the last financial year.

Back in India, the Government is betting big on the affordable housing segment to boost up market sentiments and to cater to growing demand of affordable units. Developers, who were previously wary, taking note of the government sops and initiatives have now started foraying into the segment. This has resulted in boosting sales and driving down inventory.

This is predicted to go a long way in improving the real estate market condition over the coming years. Also with the approval of FDI in real estate via REIT is touted to be a game changer and is expected to give the stagnant market a new lease of life.